I have been a fan of Rachel Aaron pretty much from the first page of her first book, The Spirit Thief. With Last Dragon Standing, she has released her thirteenth novel and finished her third series, and she is still going as strong as ever. It is the fifth volume in her Heartstriker series, detailing the adventures of Julius, the Nice Dragon and Marci, his human mage. It  has been quite a ride since the first novel appeared in 2014, and the conclusion this final instalment offers is nothing if not triumphant. I’ll try to avoid spoilers for Last Dragon Standing, but there will be (very slight ones) for the previous volumes of the series. 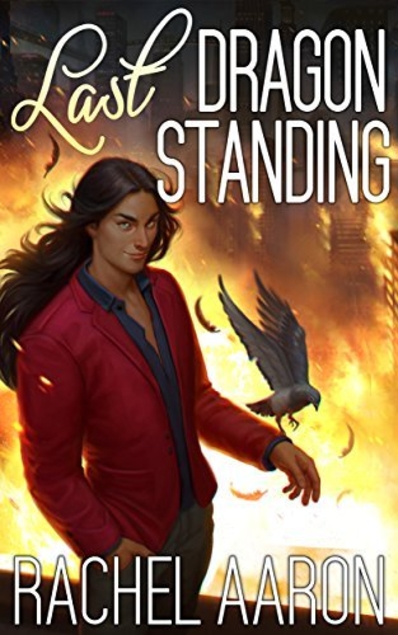 It starts off with a Prologue in which we learn the true nature of Bob’s pigeon consort, and those few pages already contain in a nutshell a lot of what I love about Rachel Aaron’s writing: The characters are mysterious, but immensely likeable, the plot twists are endlessly imaginative, but always make sense in the framework of the story being told, and the writing flows and bubbles along like a mountain brook, and feels just as refreshing. And the next big reveal follows shortly when the novel proper begins: After four previous novels(totalling I believe about 1500 pages) of complex machinations, ruthless intrigue and relentless manipulations, we finally find what Bob’s grand plan is. And it turns out to be utter crap. Nobody is willing to actually go with it, and so it is up to our protagonist’s Julius and Marci and their friends to come up with a viable alternative plan or two.

And this is all I am willing to tell about the novel’s plot, except that the plan which Julius finally hits on is a profoundly nice one – which should come as a surprise to no one, as Julius is and always has been a Nice Dragon. This merits to be dwelled upon for a bit, because it is defining not just for his character but also for the series as a whole, and the degree to which Rachel Aaron has thought out the implication of this and then let them shape her Heartstrikers series throws an excellent light on just how deft a writer she is.

The thing about Julius’ niceness is that he tries his very best to solve conflicts by non-violent means, and as the series progresses and he gains in importance (and both self-confidence and skill), he succeeds increasingly often with that. There are some extended fight scenes in the first two volumes of the series, but then comes the fight with Gregory in the third volume, No Good Dragon Goes Unpunished, in which Julius pointedly does not fight at all, and that is the last time that the solution to any important plot element involves violence (and it is of course hardly an accident that this important turning point takes place almost exactly in the middle of the series). From then on, it’s all brains and (almost) no brawn, and conflicts are resolved by good thinking and talking. A lot of talking.

Now, a Paranormal Fantasy series that is all talk and no action, should, by all measures, be a very boring affair, having characters stand around talking seems like a surefire recipe to put your readers to sleep. But this is not at all the case for the Heartstriker series, quite to the contrary – as the narrative emphasis shifts from combat to non-violence, it only gains in forward momentum (there is, I’ve written in my post on the third novel, a tiny bit of a slump in the third novel, but what little slack there was gets picked up again by the fourth volume) and the plot keeps racing ahead at breakneck speed even as it mostly fueled by talking with rather than shooting or stabbing each other. I think there are chiefly three elements creating this unexpected readerly excitement. First, there always is a sense of mystery running through those novels, whether it’s Algonquin’s plans, or Bob’s plans, or what’s up with the Chinese dragons – there always is something to be solved or to be figured out, and this keeps things fresh and interesting. Second, Rachel Aaron has an almost uncanny talent of making her characters likeable – or maybe a better way to put it would be, to make readers care for those characters, even those that are not very nice at all. Now, I am not one of those people who consider that emotionial investment in a novel’s character is necessary for the enjoyment of that novel – there are so many other potentially interesting things to care about like for example narrative structure, the use of language of formal experimentation. But if you want to tell a rousing adventure tale of whatever genre, then the reader does need to feel something for the characters, or else, no matter how ingenious your plot is, the whole thing will fall flat. And from her first published novel onwards Rachel Aaron always has been very good not just in creating characters but also in making her readers inerested in them, to make them cheer for the heroes and hiss at the villains. It’s been over five years ago that I finished her Legend of Eli Monpress but I still remember all of the main characters and I’m certain the same will be true of the Heartstriker novels five years from now.

And last but by no means least is the way Rachel Aaron builds and structures her conversations. There is a popular phrase about someone being “all talk but no action” which proclaims talk and action as polar opposites, with the underlying assumption that talking never achieves anything while it is action that gets things done. Like in most nuggets of common sense wisdom, there is some truth to that, but it is far from universal, and the whole Heartstriker series is built on the premise that a good, sensible talk can get things done as well if not far better than mindless action for action’s sake. Now, the truly brilliant thing about Rachel Aaron’s novel is that she is not content with this being a plot element and the series’ ultimate fabula docet but that she incorporates it as a structural element of her narrative, too, her stroke of genius here being that she writes dialogues as action scenes.

Which sounds simple enough, but is very hard to pull off successfully. Action, after all, is defined by stuff happening, by lots of movement, by things going “boom” or crashing into each other, etc. etc. – in shorts lots of excitement going on. Instead, you get two or more people sitting or standing around and well, talking to each other, which seems like the exact opposite. Only that it isn’t really, at least not in the hands of a brilliant writer like Rachel Aaron – in her Heartstriker series, action and dialogue are not only no opposites, dialogue isn’t just like action scenes, but dialogue literally is action, the crucial conversation in this novel all have both the excitement and intensity of a well executed action scene. I think she achieves this mainly by two means, first that there is something at stake in these conversations – on their outcome quite often hangs life or death for our protagonists, or else it is the fate of the Heartstriker clan or (especially in this final volume) the world. Secondly, and more important (and far harder to pull off) is that there is conflict, that is resolved and in a plausible manner. Rachel Aaron shows us how Julius actually has to work at convincing his opponent, and she does her hardest to come up with reasons for him to offer that his opponent can actually plausibly agree with. You really need to read it yourself to experience just how brilliantly Rachel Aaron pulls all the threads together and just how inventive the solutions she comes up with are.

Readers of previous novels by Rachel Aaron already know that she is excellent at writing speeches (see, to name just one example, Miranda’s at the Conclave in Spirit’s End), but she is taking it to a new level here. If she ever decides to stop writing fiction, I’m confident she could make a living as a speech writer, or, if she’s half as good at delivering them as she is at writing them, she really should run for President. I’d totally vote for her (if I was an USian, that is). I very much hope she’ll never tire of it, however, and that she will give us many, many more novels to squee at and gush over.