This is not your average Fantasy novel: At Amberleaf Fair contains no Chosen One and no Dark Lord, no swords and only very little sorcery, no battles are waged and no duels fought, no heroes show up and no villains, in fact there is barely any conflict at all, it takes place in a peaceful world among mostly happy people and there is far and wide no sign of that staple of fantasy novel structuring, the travelogue. In short, this brief novel is about both as un-Epic and as un-Grimdark as it gets and reads more like a cozy mystery (except there is no murder either) than a Fantasy novel. 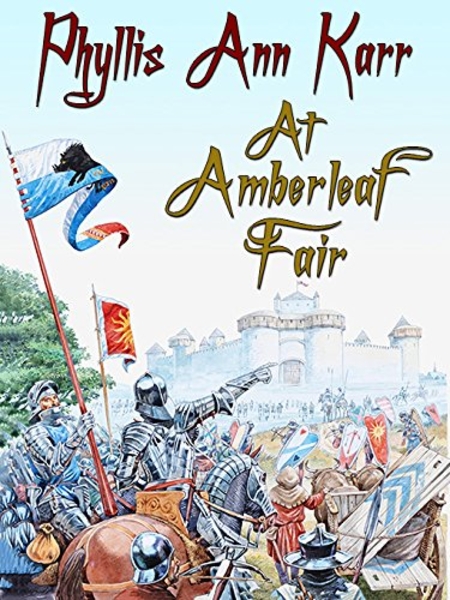 It belongs to a small Fantasy sub-genre which Jo Walton (who wrote an outstanding contribution to it with her novel Lifelode) calls “Domestic Fantasy.” Personally, I’d prefer to see it named “Idyllic Fantasy” instead, because this hints at a somewhat wider range than just home and hearth and also ties it back into a literary tradition going back to Ancient Greece.

At Amberleaf Fair is told from the perspectives of three characters: Torin the toymaker, Dylis the storyteller and Alrathe the Judge and its plot (which is minimal and very reminiscent of a mystery novel) revolves around a necklace whose theft Alrathe is tasked with investigating, with Torin being the prime suspect in the theft; tied up with that are decisions Torin has to make regarding his professional and romantic future. All of this takes place at and during the title-giving fair, so that the novel sticks pretty close to the three Aristotelian unities of time, place and action – in fact one can easily imagine it as a stage play.

Nothing much happens during At Amberleaf Fair – Alrathe investigates, Torin dithers and Dylis does her best to be supportive – and yet there is never a boring moment throughout the novel. Admittedly, that is at least partially due to it being quite short and hence not outstaying its welcome – as a general rule and with proper allowance made for the occasional exception, Idyllic Fantasy seems to work best in story or novella format, and stories belonging to that sub-genre feature quite frequently in Beneath Ceaseless Skies.

I think, however, it that it is not just or even chiefly its brevity which makes At Amberleaf Fair such a pleasant read, but that this owes even more to the way Phyllis Ann Karr weaves her tale – the way she keeps the mystery going at a slow but steady pace and thus pulls the reader along, keeping their interest up even through an almost total lack of plot; and the way she paints her characters. In fact, it are precisely the character which make this novel so engaging – in keeping with the idyllic setting most of them are sympathetic – one or two are somewhat unlikable but there is nobody even faintly resembling a villain here. And – I think more important for what the novel and the genre it belongs to set out to do – they are all immensely relatable. We encounter what are basically a bunch of normal people in slightly uncommon circumstances…. okay, in quite uncommon circumstances, what with magic and a Fantasy setting and all that. But the point which At Amberleaf Fair, and possibly the whole sub-genre of Idyllic Fantasy is trying bring across (in my opinion, at least) is basically that people will be people and that human nature will assert itself and remain more or less the same no matter how strange and alien the surroundings it finds itself placed in. One does not have to agree with this point (and I for my part am not at all certain I do) but if its made as entertainingly and appealingly as in At Amberleaf Fair, it is hard to find issue with it.