Patrick Gale is quite a well-known author in the UK, but, as far as I can tell, appears to be mostly unknown outside of Britain. Going by Notes from an Exhibition – the first of his novels I have read – I am certain why this would be the case: While there certainly is a good amount of Britishness to the novel, it is not to a greater degree or more offensively than in, say, the Harry Potter novels – and those blatantly had no issues with being popular outside of the UK. 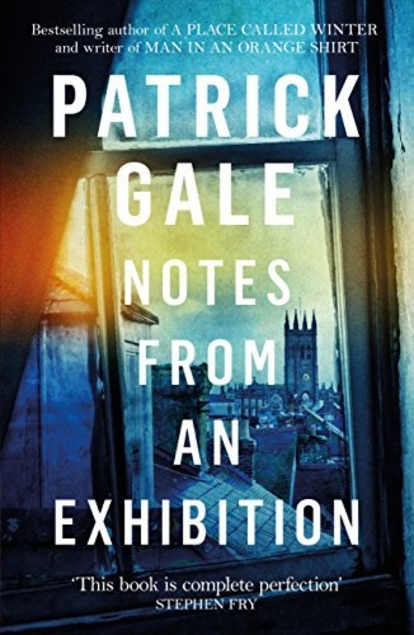 Maybe it is not so much the content, but that Patrick Gale’s works speaks to a certain, particularly English sensibility which, the occasional anglophile apart, just does not appeal to non-British readers. I think it would probably be interesting to explore that question – is there, apart from the language, an identifiable, formal or structural element in fiction that makes it particularly attractive to one nation rather than others? – and in all likelihood it has actually been done. But this would obviously take us too far away from the subject at hand, which is Patrick Gale’s novel Notes from an Exhibition, so I shall just leave this standing as idle musing on my part and move on.

Notes from an Exhibition, then: The novel is ostensibly about the fictive painter Rachel Kelly, who dies in the first chapter (or, more precisely, off stage right after it ends); the novel then alternates between chapters depicting the reactions of her family to Rachel’s death and flashbacks to the lives both of herself and her family before her death (in non-chronological order). Viewpoints change between chapters, and one of the things Gale does really well is to give each of them their distinctive voice – distinctive not just between characters, but also between the same character at different phases in their lives. Not everything is revealed to the reader right from the start – there are dark spots in Rachel’s past her family is not aware of and only finds out about after her death, and there are spots the family knows about but the reader is kept in the dark about and only told about towards the end of the novel. As the existence and outline of those unexplored areas is pointed out quite early, Notes from an Exhibition turns into a bit of a mystery novel, with the reader in suspense as to what has actually happened – admittedly, this does not exactly generate nail-biting tension, but it does help the readability of the novel which chugs along at a very pleasant speed and is quite an enjoyable read.

Which – as you may not be surprised by if you have read around my blog a bit – is actually somewhat of an issue for me, namely that the novel’s form and language are so very conventional and unimaginative.

It may not look like it on first sight – true to its title, the novel at first literally presents itself as notes from an exhibition, and exhibition on the life and work of Rachel Kelly. Each chapter starts off with such a note describing either one of Rachel’s pictures or an item relating to her life, like a piece of clothing she liked to wear. It is notable that most if not all Goodreads reviews of Gale’s novel entirely miss the difference between the two and only talk of pictures, which sheds a rather dim light on how much attention  most readers seem to be paying the books they are reading. To their defense, however, it has to be said that Gale does not appear to make anything of that distinction, either. And generally the relationship between the notes and the following chapter are very straightforward – if the note is about a picture, the chapter will show what is depicted on it or deal with the time it was created, and if it is a piece of clothing, Rachel will wear it. There is no tension between introductory notes and chapters at all, which makes it all very predictable and the notes end up being rather redundant, ornamental rather than essential to the novel.

Also it has to be said that the exhibition Gale presents is either singularly disorganised or that its imaginary visitor is zig-zagging through it a random. The novel starts with a death, and ends with another death, and as far as I can tell (with the – big – caveat that I just may have missed something) this is about all the structure Notes from an Exhibition has, apart from placing some revelations at the end to produce a mystery. The novel has an air of “just telling a good yarn” about it that I find very 19th century, and even its apparent breaking up of chronology is somewhat half-hearted, as the present-day parts are actually told in order, with flashbacks inserted between their orderly progress.

And finally, and most disappointingly, the language: Notes from an Exhibition is very well written, but in a very conventional way that never even attempts to push the reader out of their comfort zone. Admittedly, the novel may have been unlucky in that only a few weeks before I read Going Home by Doris Lessing. While that is mainly a book of political journalism it does start out with a lengthy description of the Africa of the author’s youth, descriptions that are very painterly and quite abstract, dissolving the visible world into light, colour and shape – quite reminiscent, in fact, of the paintings of Rachel Kelly as Gale describes them but described in a way that would be appropriate to the way a painter of abstract pictures might perceive the world. As beautiful as Gale’s language is, it falls flat when it comes to tackling his more extreme subjects, just seems too well-mannered to come to grips with things like abstract painting or bipolar disorder.

But I do not want to sound too grumpy: Notes from an Exhibition is by no means a bad novel; quite to the contrary. The characters have considerable depth, and the reader follows their fates with unflagging interest; also, as I mentioned before, they novel really excels at giving each his or her unique voice. It is also a very emotionally involving novel, it draws the reader in and lets them share in the life of Rachel and her family, the happy moments as well as the struggle and grief; and I doubt anyone can read the novel without being moved by it in several places, possibly even to tears (I at least had to reach for a tissue once or twice). Where Notes from an Exhibition really shines, however, is on the thematic – the way Gale weaves together his central subjects of art, life, mental disorder and family, gives each its proper weight and lets them all illuminate each other is exceptionally well done. But the real centre of the novel seems to – and noticing that did come as a surprise – Quakerism. The Quakers and their particular attitude to life and the world (of which I knew next to nothing before reading Gale’s novel) are omnipresent throughout; even characters who are not Quakers themselves attend Meetings, and everything that happens stands in some relation to that experience and in particular to the silence happening in them which bears a special significance for Quakers. Gale manages to make it sound quite attractive even to a die-hard agnostic like myself, and, more importantly, he makes it the unobtrusive focal point of his novel by which everything is measured and to which everything eventually returns.

In short, I really liked Notes from an Exhibition and am looking forward to reading other works by Patrick Gale. But I also think it could have been a better novel if it wasn’t so comfortable in its own confines, if it would risk more and not be so damnably… well, cozy. And maybe that is the answer to why this novel seems so very British – after all, England gave us cozy crimes and cozy catastrophes, so it may not be too far-fetched that this is a state of mind particularly well-suited to the English national character. Assuming, of course, that there even is such a thing.