The Seven Deaths of Evelyn Hardcastle is a book in which twists and revelations play a large part; and while it undoubtedly will be great fun to re-read with the solution in mind in order to see how Stuart Turton placed all of his numerous puzzle pieces, for a first reading the less you know about what to expect, the better. The novel is an intricately crafted puzzle wrapped in a mystery story pervaded by a dense, creepy atmosphere and some elements of the supernatural or SFnal (we never really find out which). If this is something that appeals to you, I’d recommend you to skip this blog posts, skip reading any reviews of the book altogether, and, if at all possible, even avoid reading the back cover description, and instead that just grab the book and start reading. Chances are, you’ll be enjoying the experience a lot.

With that out of the way, I’m not going to hold back on spoilers in what follows, so if you have not read the novel yet, turn back now. The post will also very likely not make much sense to you unless you are somewhat familiar with the novel. You have been warned. 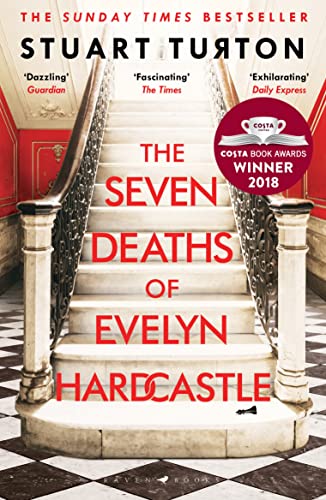 I came upon this novel by way of Leander’s – as always excellent – review, and was sufficiently intrigued to not only grab the book right away but also start reading is shortly afterwards. Seven Deaths (as I’m going to refer to it for the rest of this post) is frequently described as “Groundhog Day meets Agatha Christie” which I think somewhat misses the mark: In Groundhog Day there was a single consciousness re-living the same day over and over, trying to manipulate the day’s events in a way to lead to a different outcome than him returning to the beginning. Applied to Seven Days that would be events as experienced by the Plague Doctor, as he is the one who retains full memory (and, we are told, does indeed experiment with different variations).

With Aiden as our narrator, however, we get something entirely different – it is not so much about events repeating themselves, but rather about seeing them from a different point of view, thus putting them in perspective and revealing sides to them that were previously hidden. For example, right at the beginning of the novel, Aiden (as Dr. Bell) watches a woman named Anna being pursued by a man and being murdered. Later on, we learn the identity of the man, but we also find out that he did not murder the woman and that she wasn’t Anna, but someone else – only to learn even later on that she was not really the someone else we assumed her to be either. This is what make Seven Deaths an occasionally challenging read and the reason reading it requires some focus – events, people, things and their significance keep shifting constantly, pretty much nothing is what it appears to be at first sight but is revealed to be something else entirely or turns out to have a different meaning than first suspected.

While there is an element of repetition, then, it is never quite repetition of the same, as Aiden (and, of course, the reader’s) perspective on events keeps changing, and events appear differently the more knowledge about what is going in Blackheath House is accumulated. If I were to venture my own comparison, I’d go for Judex (the 1963 film by French director Georges Franju as well as the silent film serials by Louis Feuillade that inspired it – the latter interestingly created in roughly the same time period Seven Deaths is set in) as scripted by Steven Moffat.

Judex mainly for the mood (just check out the opening of Franju’s film or anything by Feuillade and you’ll see what I mean), an encroaching, slightly unreal atmosphere that becomes more and more pervasive and dreamlike as the central mystery deepens. There is  a sense of things being not quite right from the very start of Seven Deaths, and that weirdness only increases as more and more strange characters appear and inexplicable events occur. It does not let off even when things start to fall in place and both Aiden and the reader begin to catch glimpses of what is really going on in Blackheath House, and does not quite dissolve even at the end, as several questions remain unanswered. It is very deftly Stuart Turton, who may not be the most brilliant stylist but certainly knows how to tell a good yarn and build as well as sustain a creepy atmosphere – it’s all very impressive for a debut novel, and I’m certainly be curious about where he will be going next.

Moffat, of course, for the puzzle box approach to story-telling for which he has become famous; and I can just imagine him reading Turton’s novel and nodding in approval at the way the story unfolds, or rather, unravels, like a complex knot being slowly picked apart strand by strand. This is not only related to the body-hopping part of the narrative, but already begins with there not being only one mystery to solve, but actually two – namely, who murdered Evelyn Hardcastle, and what is the deal with Aiden and his rivals and the Plague Doctor? And things get a lot more complicated before the novel ends, with many more corpses turning up all over the place, and the roles and characters of the – for lack of a better word – “detectives” constantly shifting. A lot of readers seem to have had problems following the plot with all its numerous twists on manifold levels, but for my part I had no such issues – Turton keeps all his balls up in the air and does a marvellous job of juggling all the reveals and surprises. I suppose, though, that it can’t harm to make a spreadsheet keeping track of who is who and is doing what at which time.

At its core, however Seven Deaths is a classic country house mystery (even the time it is set in – not too long after First World War, as indicated by a memory of the trenches from one of the hosts – is very Golden Age), but distorted into something weird. It is also far from cozy, but the utter lack of certainty about pretty much everything concerning both plot and characters is profoundly unsettling, and almost gives the impression of a horror novel. Indeed, if my theory about the mechanism behind events (see below for that) is correct, Seven Deaths could rightly be considered a ghost story. Turton obviously enjoys playing with the conventions and clichés of both genres, adding yet another level of enjoyment to what already is a superb novel.

There are some very minor flaws – mainly, that quite a few open questions and loose ends remain at the end of Seven Deaths. Some of them I think are intentional, some I suspect are not. The one that bugged me the most among the latter: How is it even possible that the people running Blackheath House missed three other murders besides the one in the title? Millicent may have looked like an accident, but Peter and Helena Hardcastle certainly did not – so how could they find out that Evelyn’s death was murder but not even notice the others? Also, how did the white envelope that Aiden uses to blackmail him get under Cunningham’s seat? I may have missed it, but I did not see any of Aiden’s later hosts write it and place it there.

The most glaring omission however, but one which I think is purposefully left open is that we are never told just how the whole mechanism of body-hopping and memory-resetting is supposed to work. True, there are some extremely obscure hints at the end, but they are so few and so vague that they do not even qualify as hand-waving. I do have a theory about that, however and think that we can infer some things from the course of the novel – namely that what is taking place here is not time-travel at all, but that Aiden, Anne and their rival are caught inside some kind of simulation, maybe something analogue to the holo deck from Star Trek, or maybe their consciousness has been transferred to a computer and is now running as a program (think Ubik or Matrix). Either way, I suspect that nothing they are experiencing at Blackheath House is actually real, but only an infinitely looped simulation, with all the other people basically NPCs. Which would also explain why the Plague Doctor – who we are told is basically a decent guy – is so unconcerned about saving Evelyn, and only interested in finding out who her killer is: The real Evelyn Hardcastle is long since dead, and there’d simply be no point in saving a simulation.