Half a Crown is the final instalment of Jo Walton’s Small Change trilogy which is set in alternative history Great Britain in which England arranged itself with the Nazis, which led to Germany winning the Second World War and Britain starting a slow slide into fascism. 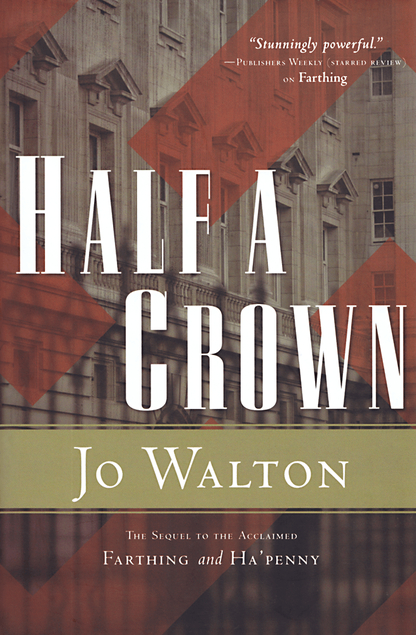 In 1960, when the novel is set, it has almost arrived there, with the opening of the first concentration camp on British soil being imminent. Russia has been destroyed by nuclear bombs, the USA have declined into insignificance and Germany, Japan and Britain are about to meet for a peace conference in London to give the new world order a lasting shape. Peter Carmichael, still holding his post as Commander of the Watch (the British version of the Gestapo) he was blackmailed into taking in Ha’penny, has been tasked with supervising security for the conference and also has to deal with an attempted coup by the Duke of Windsor which, if it was to succeed, would make things even worse than they are now.

As in the previous novels, Carmichael constitutes one point of view for Half a Crown, while the other, also as before, is provided by a young female first person narrator, this time Carmichael’s ward Elvira, a young debutante about to be presented to the Queen.

I liked both Farthing and Ha’penny a lot, Half a Crown… not quite as much; in fact it is the first novel by Jo Walton that I read which left me somewhat disappointed. This is mainly due to two reason: For one, Half a Crown completely jettisons the Cozy Mystery element of the other installments. One could argue that after eight years of fascism there is not much left in the way of Cozy, but the same could be said about Farthing, and Jo Walton did a brilliant job de-cozifying the Cozy Mystery in that novel. I think Half a Crown loses quite a bit of what made this trilogy special by becoming a “straight” alternate history novel – but that might just be a matter of personal preference.

And then, the alternate history of Half a Crown is not completely straightforward – but it is precisely here where the second, and I think much graver, problem lies. From the beginning of Farthing to almost the ending of Half a Crown, the Small Change trilogy has been a very bleak affair, with its main characters seeing things go ineluctably from bad to worse and, despite all of their attempts to stem themselves against the tide of evil, being swept away by it. Then, about twenty pages before the end of Half a Crown, Jo Walton plops a deus-ex-machina, fairy tale ending in front of readers and expects them to believe that everything is rosy again and the future full of hope.

Admittedly this ending was not a total surprise – right at the start, Walton hits readers over the head with the Cinderella motif and then keeps repeating it throughout the novel, to the point where I was wondering if maybe the novel was meant to be a regular mash-up between alternate history and fairy tale (like the previous had been between alternate history and cozy mystery). While it probably was, I do not think it was as successful – the fairy tale godmother waving her sparkly wand and making everything okay again just grated with everything that had gone before, and I did not think it was very plausible either. I was reminded of those American films where the day is saved if the hero only manages to tell some newspaper or TV station about the bad things going on, because of course everything will right itself if only people know what’s going on, except that, this being British, we get the Queen instead of the Press. I won’t say that the ending ruined the trilogy for me – for the simple reason that it did not, the first two novels are still excellent,and even this third is a good read – but it was a bit of a letdown.