END_OF_DOCUMENT_TOKEN_TO_BE_REPLACED

Rick Riordan is best known for his Percy Jackson series of Young Adult novels which is apparently quite popular. His first couple of novels before he started writing YA however, are a series of crime novels centered around private investigator Tres Navarre. I was not aware of that either until i stumbled across them when the e-books were on sale. The Last King of Texas is the third novel in the series (and the third one I’ve read) and so far it has been rather a lot of fun.

END_OF_DOCUMENT_TOKEN_TO_BE_REPLACED

Taunt Me is the second volume in Annabel Joseph’s Rough Love trilogy. It takes place two and a half years after the ending of Torment Me, with Chere about to graduate Design School. She has not seen nor heard from W during all that time, but he is still very much on her mind – as is she is on his, as we find out in the first chapter told from his perspective.

END_OF_DOCUMENT_TOKEN_TO_BE_REPLACED

The second issue of Peter Milligan’s and Tess Fowler’s Burroughs/Kafka/Horror mash-up, and I’m happy to say it is just as resistant to coherent interpretation and as mind-blowingly confusing as the first issue was. Some recurring themes begin to crop up: questions of identity were already prominent in issue #1 and continue to be important here; in addition the introduction of two new characters, a writer and an artist, makes me think that there might be a self-referential element to the way brain matter as well as memories and concepts get swapped around by the Kid’s ray-gun – possibly this whole comic is an ongoing metaphor about art? or comics in particular? We’ll have to see how things develop.

This second issue is really heavy on the Kafka references (and on Kafka references swiped from Burroughs), so heavy in fact that Die Verwandlung is practically required reading for Kid Lobotomy (but then, it should be required reading for everyone anyway). There are probably tons of references in the graphics, too, but being mostly illiterate in that area, I missed most of those. I do like the graphics, though – they do invite closer scrutiny, and I love the way Fowler makes the panels jumble over and into each other, often completely getting rid of the gutter or replacing it with something black with… orange scratches on it? I’m not sure what it is, but the overall result is certainly fascinating and creates a great visual analogy to our main protagonist’s unhinged state of mind.

In short, this comic continues to be oodles of fun, and while I’m still at a loss as to what it’s actually about, trying to figure that out has been hugely enjoyable so far.

END_OF_DOCUMENT_TOKEN_TO_BE_REPLACED 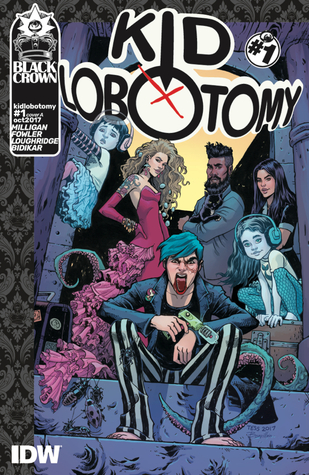 In the very first panel of this first issue of Peter Milligan’s and Tess Fowler’s comic Kid Lobotomy, the narrator and protagonist tells us about the “cut-up” technique of neurosurgery developed by “Dr. Burroughs”, and from there on it should be obvious that we’re not in Kansas any more. (The more discerning readers of course already got suspicious at the comic’s title.) It does not take long for Kafka to be referenced, too, and by then it is clear to everyone that we’re off to a wild ride.

This is obviously not your run-of-the-mill super hero comic. This being the first issue, it’s not quite clear what it is, actually – but not nothing actually constitutes a large part of the not inconsiderable fun in reading Kid Lobotomy. Whatever else it may turn out to be, however, it is very weird, and not afraid to show it – writer Peter Milligan and artist Tess Fowler were obviously enjoying itself while flouting pretty much every genre convention of comics and cramming in as many literary and artistic references as they could. This is probably not for everyone, but for my part, I’ll definitely continue with the series and am quite excited to read the next installment.

This blog has not been particularly lively last year, for a variety of reason – none of which was, I am happy to say, due to my lack of reading. Goodreads did their reading overview again, and for anyone who is curious about what I read in 2017 and did not write about, the link is here.

Not sure what next year will bring – I do want to write more, but just don’t seem to be able to muster the energy to actually do so. In any case,  I wish everyone a wonderful holidays and a great start into 2018 – see you next year, I hope.

And here’s a song – not very seasonal, but highly relevant, very intense and emphatically worth your time:

After having read all six of the Chinese Classic Novels, it seemed like a logical continuation to go on to the Classic Japanese novel Genji monogatari; not just because of the geographical proximity but also because Japanese culture was greatly influenced by China back then (the early 11th century) and I was expecting something in a similar vein. As it turned out, I was profoundly mistaken in that assumption – The Tale of Genji is something quite different and fascinating in its own, unique way.

END_OF_DOCUMENT_TOKEN_TO_BE_REPLACED

It’s not like I never read any comics – I have read several, even posted on this blog about some of them. But those were few and far between, and it took me quite some time to get through each of them. I’m not quite sure what the reason for this is – reading The Sandman quite thoroughly cured me of any residual ideas of comics being for kids that I might have had, and I always meant to read more. Maybe it’s my ongoing struggle with visual arts – but that never kept me from watching and enjoying lots of films. Maybe it is the hybrid nature of comics, straddling both literature and graphics, and feeling at home in the first and rather lost in the second, I always felt off-balance when reading comics.

END_OF_DOCUMENT_TOKEN_TO_BE_REPLACED

“Maboroshi no Hikari” translates literally as “Light of Illusion” and I am tempted to read this as a reference to my favourite film by Eric Rohmer, Le Rayon Vert (i.e., “The Green Ray”). It is however fairly unlikely, seeing as the two film do not have all that much in common – although it has to be said that both figure a young female protagonist who is somehow out of synch with her surroundings.