I was aware that Eric Ambler was an author of thrillers, but somehow I totally missed that he wrote spy novels. As it turns out, he not only did but it even was him and not, as I’d always assumed, John le Carré who first injected literary ambitions into the genre, and all later authors then built on his efforts. 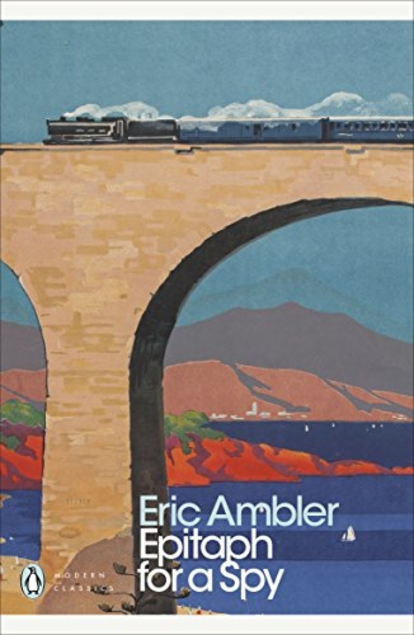 Having said that, Epitaph for a Spy is quite different from anything Le Carré (really the only author of spy novels I have read so far) was to do later: Ambler’s protagonist, Josef Vassady, is not a professional spy but gets involved in espionage through a mixture of accident and blackmail. And the reader soon (rather sooner than Vassaly himself) finds at that he is really, really bad at it – he does try hard, but bungles one amateurish attempt after the other. His task (or what he assumes to be his task) is to ferret out a spy among the handful of residents of a small hotel in a French seaside resort and as our protagonist conceives and spectacularly fails to execute one hare-brained scheme after another, quite a bit of hilarity ensues.

Epitaph for a Spy is mainly a comedy which draws its humour chiefly from the way Vassady attempts to apply plans he seems to not so much have come up with himself but snatched from a variety of James-Bond-like spy novels to what is at hear a realistic setting. Obviously (obviously, that is, for everyone buy Vassaly) this can`t work, and doesn’t and ends up being quite funny. We’re dealing with a parody of the spy novel genre then, and Ambler ridicules it by repeatedly showing how none of the common clichés of that genre would hold up if anyone actually tried them out.

But while the parody unfolds, it turns out that none of the hotel’s guest, who seemed a bit bizarre but overall quite charming, is quite what they claimed to be, that in fact some of them are quite sinister figures and as the novel progresses its canny humour takes on an increasingly creepy undertone.
The novel was first published in 1938 and Ambler obviously was very aware of what was going on politically at the time and very critical from what is clearly a very left-wing perspective. The introduction of my edition is quick to emphasise how he was not a communist, but that is pretty much a mandatory disclaimer (see most of the introductions to the novels by Sjöwall/Wahlöö) and personally I am inclined to think Ambler’s astonishing clearsightedness owes rather a lot to his political leanings.

However that may be, the longer the novel progresses, the more the political situation keeps seeping into its atmosphere which grows increasingly menacing even as the narrative retains its comical aspects. But even as the Vassady continues his bumbling Ambler raises the reader’s awareness that the novel’s protagonist does not act out of his own volition but is forced into playing a spy and that his situation is becoming more and more desperate as his target keeps eluding him. And we also learn some of the resort guests’ background stories some of which are also quite grim. And there is a twist at the end which come almost as an aside and is not even part of the main plot which is quite chilling and ends the novel on a very bleak outlook for the future. And I think it is precisely this balancing act between the comical and the menacing which makes Epitaph for a Spy remarkable – Ambler handles this very deftly and uses the increasing tension between those two elements to both drive his plot and create a unique atmosphere for his novel.