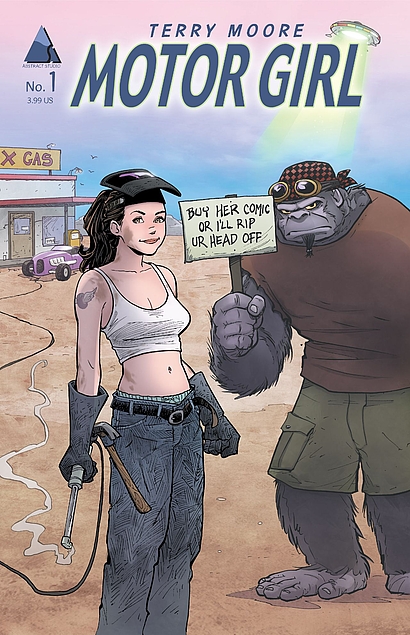 This sounds like the set-up for some light-hearted fun, and while this assessment is not completely off the mark (in fact, the comic is quite hilarious in parts), at the same it could not be more wrong. The first indication that Terry Moore’s ten-issue comic (also collected in two trade paperbacks, but I read it as single issues) deals with more serious matter than the premise would have one suspect is when we learn that Samantha, our protagonist, is a war veteran who did two tours and spend a year as prisoner of war in a camp in Iraq; the second comes when we learn that she is the only one who can see Mike the talking gorilla – it is then that we realise that she is suffering from post-traumatic stress syndrome, and indeed the way she copes with her experiences in Iraq and the scars they left – both on her body and in her mind – will be one of the main narrative and thematic threads of this comic.

Motor Girl was written, drawn and even (with the help of his wife Robyn) published by Terry Moore; the only thing about the comic he did not do himself is the colouring of the covers, which was done by Steve Hamaker. Moore is best known for his long running, soap-operatic Strangers in Paradise and while he wrote or drew some things for Marvel and DC, most of his work is creator-owned and independently published – indeed, he seems to feel most at home and be at his best when he writes about his own creations rather than someone elses’.

Motor Girl is (as I am writing this) Terry Moore’s most recent creation and (with 10 issues or two trade paperback collections in all) his shortest. As it is the first work by him which I have read, I can’t tell whether the relatively short run works in the story’s favour or to its detriment as I an unable to compare it to his longer-running comics. However, I can say that I loved Motor Girl very much indeed and that I think it is a great comic which takes a relatively unassuming and even slightly silly premise and runs with it, reaching unexpected places and achieving a surprising emotional impact – I doubt anyone who has read the first nine issues can read the final one without at least having a lump in their throat, if not outright tearing up. 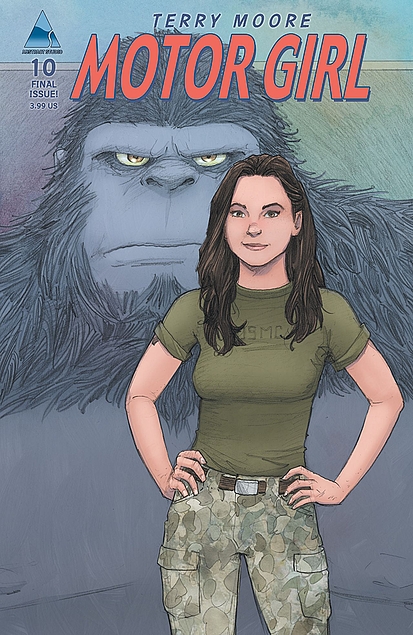 Other characters beside Sam and Mike include Agatha (who owns the junkyard Sam is managing), Mr Walden (the UFO-hunting villain of the comic), Mr: Walden’s minions Victor and Larry, and last but by no means least the alien “Bik”. One of the strengths of Motor Girl lie in the way the comic treats those characters – they may commit ethically doubtful acts at times, but they all have good reasons (or what they think are good reasons) for what they are doing, and Terry Moore never loses sight of their essential humanity. And yes, that does include the alien, and no, this is not contradictory at all, because of… reasons (which would lead deep into spoiler territory hence I won’t go into any more detail – just trust me on this). And as one reads issue after issue (with, in my case at least, persistent delight) one finds oneself actually liking all of them, even the ones with doubtful ethics (with the possible exception of Mr. Walden who stays a bastard right until his – quite magnificent – end, but even he always retains his dignity). Even as it features talking gorillas and little green men, Motor Girl is one of the most humane comics I have ever read – the narrative is sustained by a deep and heartfelt sympathy for what it means to be human, with all the flaws and foibles that entails, but also with admiration of the amount of love and understanding humans can be capable of. This is a very moving comic, one that will tug at your heartstrings, but not in a manipulative way; there is a real depth of emotion here which I don’t think you find all that often in comics.

And it also is a very beautiful comic. As I keep pointing out, I don’t know the first thing about visual arts, so am not really competent to judge this, but I found the graphics to be utterly gorgeous. Except for the covers, Motor Girl is entirely in black and white, kept all in clear pencilled lines with no shading (I hope I’m getting the terminology right here – apologies if I’m off). Even with these reduced means and the apparent simplicity, the panels are such that they invite the reader’s gaze to linger on them for a long time, to take in the overall atmosphere, explore all the small details. I read somewhere that Terry Moore names Charles M. Schultz (of Peanuts fame) as his most important influence, and you can really see this in the way Moore needs only a few lines to convey even complex expressions in chis characters. A particularly striking example of this comes at the beginning of #10:

Even without knowing anything of the comic is about, just looking at these wordless pictures tells you a lot about the people in them. Also note how this sequence is structured: it starts with a close-up of our main protagonist then pulls increasingly farther back for each of the following characters; the distance determined by how central they are to the story. We don’t get to see what they all are looking at here – that is taking up the whole of the opposite page, so that we get to see the whole picture, so to speak (which I’m keeping from you here to avoid spoilers – although just looking the characters’ different expressions here might enable you to make an educated guess).

And it’s not just people, but the scenery is beautifully drawn, too – Motor Girl takes place in a desert somewhere in the United States (I don’t think it is ever specified where exactly, but I may have missed that), and the landscape is as sparse as you’d expect. And yet, somehow Moore manages to make even this mostly empty place gorgeous and fascinating, and very frequently had me look for a long time at a picture with basically nothing in it except for a couple of rocks and some sand – there is something almost Zen-like about it and the magic undoubtedly arises from the equally relaxed and precise flow of Moore’s lines which I at least find endlessly compelling.

The graphics are not only there to look pretty, however – they contitute an integral part of the narrative, and often tell a story of their own, either supporting the text narrative or subverting it in some way. To take one example where this is very obvious: Here is Mr. Walden talking on his mobile phone to one of his minions who is of course properly dressed in a suit when talking to his boss:

And then we turn the page and see this:

It’s all a matter of framing, and one can’t help but wonder what other things there might be hiding outside of the panels, just out of the reader’s sight. In fact, this throws wide open the question whether there aren’t things beyond visible reality that we cannot see, and brings us right to what I think is the central underlying theme of Motor Girl – namely the limits of perception. The example I just quoted shows this on a very small scale, but it runs through all ten issues, starting with the Gorilla only Samantha can see, to the way the aliens appear to be perceived differently by different people, to many other instances throughout the comic, and finally culminating…. but no, that would be spoilers. Suffice it to say that Motor Girl probes the theme of how reliable and trustworthy perception is consistently and on all levels; and that it investigates the ways how imagination helps us deal with reality and the things that happen to us. Motor Girl thus is not only one of the most moving and humane comics I have ever read, but also one of the most intelligent ones, and is overall wonderful – I really cannot recommend this enough, it really shows what comics are capable and makes me happy that I’ve finally started discovering the medium myself.